A few weeks ago we wrote a blog in response to the recent poll from CIBC which found that ‘86% of people agree that renovations end up costing more than you plan for’.

We highlighted that exploratory work is one of the most important things to keep in mind when considering costs. Something which our recent renovation just discovered.

During the initial stages of a new renovation project, our team was demolishing the outside of the home. While pulling down the stucco siding of the home, they discovered another layer of a shingle sitting behind this outer stucco layer.

This new discovery was about to get even more interesting when one of our team heard a smash and realized they had put their hammer through a window behind the outer siding. The photos below show the current window sat next to the recently discovered original windows.

It soon became very clear there was a whole new layer under the stucco. A surprise that none of us expected! 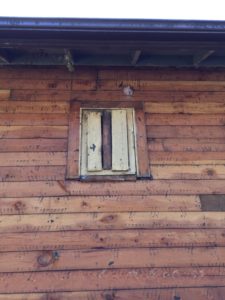 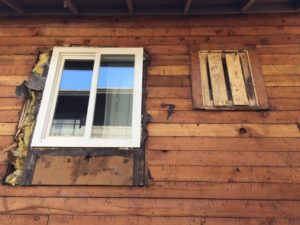 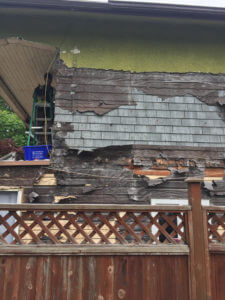 The current owners had no idea the shingle or old windows existed behind their outer wall. The discovery provided a interesting ‘window’ to the past and painted a picture of how the original home would have looked. Our clients must have had similar taste to the original owners as they actually want a shingle effect for their new home. Little did they know they will actually be renovating their home to look more like the original than it did before demolition. Pretty charming right?

Other interesting discoveries included a milk delivery door which would have once been used for the milk man to deliver milk and the owners to collect it in the morning. A endearing blast from the past which reminds us how much architecture and homes have changed over time. Don’t worry, the owners have kept as much of the old material as possible and even plan to use the old milk delivery door as decoration in their new home. 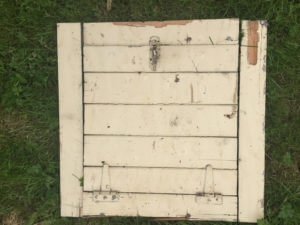 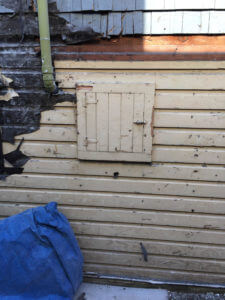 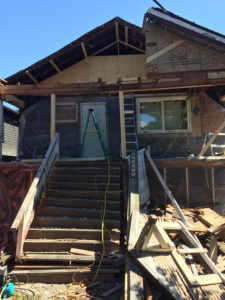 I can hear what you’re saying… if the current owners want shingle siding why wouldn’t you restore the original and use this? We wish we could. Unfortunately the method that had been used to stick the stucco siding to the home had required nails to be hammered into the shingles, meaning many of them were too split to salvage. What this means is the demolition is not a simple job, the job technically needs to be done twice.

This discovery will end up costing more money in the long run, which will of course affect the expectations of the client. Where possible we try to keep the costs down for clients, however there are of course some unexpected situations which are out of our control. This is why it’s paramount to understand that exploratory work can be costly and to always consider this before planning out a budget. We created a handy checklist of items to consider before renovation begins.

With that said, if you want a job done well, it’s important to do it properly. This home will look fantastic, increase it’s value and will no longer have any hidden surprises.